Aberdeen Floods – City is Washed Out by Heavy Downpour

Dritech Appears on Channel 4’s ‘The Storms That Stole Christmas’ 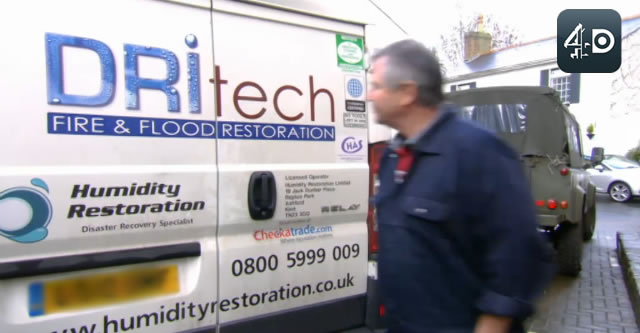 Channel 4 recently broadcast the first of a two part series documenting the effects of this winter’s floods and storms including the impact it had on the lives of people who had property damaged as a result. The documentary not only reported the damage to the landscape of the coastal regions and areas where rivers had overflowed into residential areas, but also how much the storms played a part in effectively ruining Christmas and New Years for people nationwide.

In recent month’s hurricane force winds battered flood defences along coastal regions causing up to £10 billion pounds worth of damage. The nature and complexity of the storms have had experts join together in locating the actual reason Britain has had to endure the wettest winter to date. Scientists and weather experts soon came to the conclusion that the conveyor belt of awful weather has been a product of jet streams running high above Great Britain in a narrow bond of warmer air mixed with sub-tropical air reacting with each other.

The Channel 4 program goes on to document individual stories from people living in the torrential conditions which would have been a familiarity to many living around the same areas. As storms settle and flood water slowly disembarks leaving many residents questioning what to do next. One family that was featured in the program very wisely decided to select the help from on of the Dritech Fire and Flood Restoration branches who are already undergoing the procedures to convert their home back to its pre loss condition.

This torrential episode of weather has truly left its mark on life among rural Britain with large Plaines of fields still submerged. Livelihoods faced with a huge challenges, home owners struggling to cope and public transport systems having to seize it seems chances of getting back to normal simply cannot be achieved although thanks to vast efforts from groups, communities, restoration company’s and volunteers slowly but surely things are becoming more promising.

This website uses cookies to improve your experience while you navigate through the website. Out of these, the cookies that are categorized as necessary are stored on your browser as they are essential for the working of basic functionalities of the website. We also use third-party cookies that help us analyze and understand how you use this website. These cookies will be stored in your browser only with your consent. You also have the option to opt-out of these cookies. But opting out of some of these cookies may affect your browsing experience.
Necessary Always Enabled
Necessary cookies are absolutely essential for the website to function properly. This category only includes cookies that ensures basic functionalities and security features of the website. These cookies do not store any personal information.
Non-necessary
Any cookies that may not be particularly necessary for the website to function and is used specifically to collect user personal data via analytics, ads, other embedded contents are termed as non-necessary cookies. It is mandatory to procure user consent prior to running these cookies on your website.
SAVE & ACCEPT